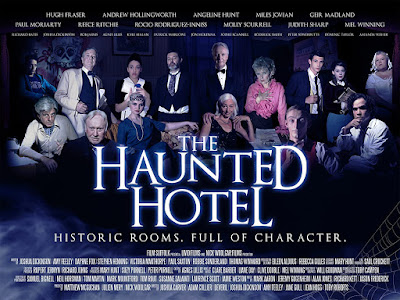 The story: The legendary Great White Horse Hotel in Ipswich has provided board for many a guest over the decades. From ordinary folk to famous faces - all have come seeking a bed for the night in the grand hotel. The Haunted Hotel is an anthology of eight different tales, all with one thing in common - the ghostly encounters within them.

The verdict: Comprised of eight separate stories, each set in a different decade, The Haunted Hotel is a collaborative project from FILM Suffolk. Inspired by the rich folklore and ghost stories of the county and of the fantastic location of the now closed Great White Horse Hotel, the film brought together local filmmakers, writers and actors in a film which was made possible by crowd funding.

Anthology films can often feel slightly disjointed, especially for audiences unused to seeing a myriad of different stories play out within one film, so it is really important to have an element that threads the segments together and makes the transitions between each part narratively smooth. The Haunted Hotel's framing device of the hotel setting immediately does this, as well as providing an interesting and intriguing location into which each story unfolds.

With each tale unfolding within a different decade, this allows for a diverse use of visuals. Ghost of a Chance, set in 1968, sees the hotel décor with splashes of lurid colour whilst The Contraption, set in 1924, employs the use of intricately patterned upholstery and furnishings. Yet, even with the obvious differences in each decade and the different styles from each of the DPs, the stories do compliment each other visually rather than work against each other.

The anthology style of the film also means that there is likely to be at least one story that will appeal to the audience. Each story brings something different to the film, and I must admit that I was surprised by the range of tones in the film - there are the traditional ghost story elements of course, but there are also some heartfelt moments, some thought provoking moments and some highly comical moments.

My personal favourite segments were Room 27B, set in 1952, because the narrative took a surprising turn that I wasn't expecting and made good use of misdirection. And I also really enjoyed Watching, which was set in 1836. Again the narrative had a twist at the end which was great (and I won't spoil), but this segment was also particularly impressive technically because of the use of candle light as the only source of light. This made Watching very atmospheric.

That being said, that is only a small complaint and does not detract from the film as a whole. The Haunted Hotel is a community project that should be praised for its collaborative nature and use of limited resources. I found the film engaging throughout, and I really liked seeing how each story unfolded and trying to guess which decade would be next. This is a film that deserves to find an audience - make your reservation and go and see it!